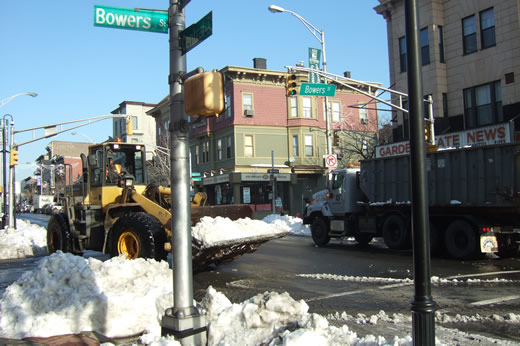 The Jersey City Incinerator Authority and Jersey City Parking Authority came out in force early Thursday afternoon on Central Avenue for some much-needed snow removal. Using dump trucks and bulldozers the JCIA began clearing lanes on Central Avenue as a lively midday crowd walked up and down the Avenue. They freed up crucial pavement for walking and driving just in time for the long Holiday weekend.

On Wednesday December 29th, Jersey City releases list of streets where cars must be moved for snow removal. City Officials asked residents to move cars from the Central Avenue (State Highway 139 to North City Line) so “curb-to-curb” snow removal could take place from 7 pm to 7 am the next morning.

The Jersey City Independent reported that the City is ticketing any residents who shovel snow into the street after it has been plowed. Doing so is a violation of city law, which requires all residents to pile shoveled snow against the curb line instead. City inspectors began ticketing residents for this violation at 1 pm on 12/29.

Wondering when your street is going to be plowed? Jersey Journal covered the story on NJ.com. Also, visit the Official Jersey Cit yWeb Site for updates.

CASID is contributing to the snow removal effort as businesses are urged to clear their sidewalks as much as possible while CASID staff members clear crosswalks, fire hydrants, benches, and litter baskets. We ask residents and shoppers to be patience as we combine our efforts to clear out the 3/4 mile business district.