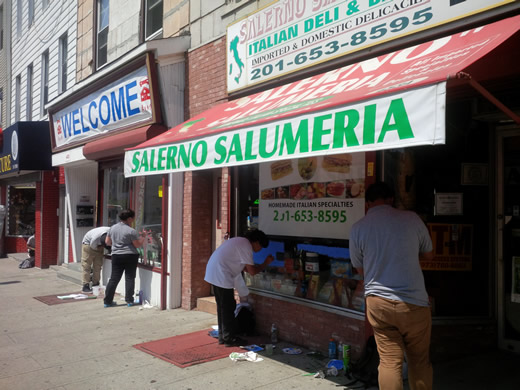 Jersey City, NJ – The Jersey City Parks Coalition, Frogs Are Green, Jersey City Board of Education and the Central Avenue Special Improvement District invite you to take a stroll down Central Avenue as over 90 Jersey City students have painted their vision for a “City of Trees” on participating storefront windows this past Thursday, May 26th, 2016. The artwork will be in place for the following two weeks.

“Residents, businesses, local schools, and young artists are working together to help beautify and green their main street community for an important environmental cause,” says Sanford Fishman, a longtime pharmacist from Bond Drugs and Central Avenue SID President. “With a 113 tree beds in the shopping district, Central Avenue is proud to have by far the most trees of any commercial district in Jersey City. Our business community recognizes the importance of trees and it is a pleasure to team up with local residents and schools to continue to drive that message.”

A few weeks ago Jersey City students answered the call to participate in the “City of Trees” initiative and over 100 students from 10 different schools submitted their artworks. Now they are taking those visions to the Jersey City Heights community and its main street. Each student will have a designated area on a shop window in which to replicate his or her sketch. The artwork should remain up for a few weeks, so all can see and be inspired to learn more.

After the success of last fall’s Heights Halloween Window Painting Contest by the Central Avenue SID, which brought out nearly 100 students to paint festive Halloween portraits on Central, the Jersey City Parks Coalition thought it would be great to have young artists help raise awareness about Jersey City’s severely low levels of tree canopy.

“We are thrilled to be working with the CASID on their second Central Ave Storefront Window Painting Project,” said Laura Skolar, President of the Jersey City Parks Coalition. “This project is an exciting component of our City of Trees arts and education partnership with Frogs Are Green. Educating students on the important role of trees in the environment is one of our greatest tools in our greening today for tomorrow initiative, City of Trees. Goldman Sachs is the Jersey City Parks Coalition’s 2016 Education and Engagement Sponsor.”

The City of Trees initiative is the Parks Coalition’s response to the tree canopy study conducted by the Jersey City Environmental Commission, which found that the JC tree canopy is currently at 17%. (The national average is 40% for a mid-sized city.)

The City of Trees initiative promotes healthy trees by educating residents and increasing their role in the care of the City’s trees. Since 2005, the Parks Coalition has empowered residents and volunteers to get involved in greening projects, resulting in healthier and more sustainable communities throughout the City. Beginning with three member parks, the Jersey City Parks Coalition has grown to more than 20 community and parks groups that maintain, beautify and organize programs and activities for their parks and surrounding neighborhoods.

Educating students and families to care about the environment is especially important to those living in urban areas. Planting 1000s of trees will improve the health and well-being of our citizens, help the wildlife, and be a big step toward combating climate change,” says Susan Newman, founder of Frogs Are Green.